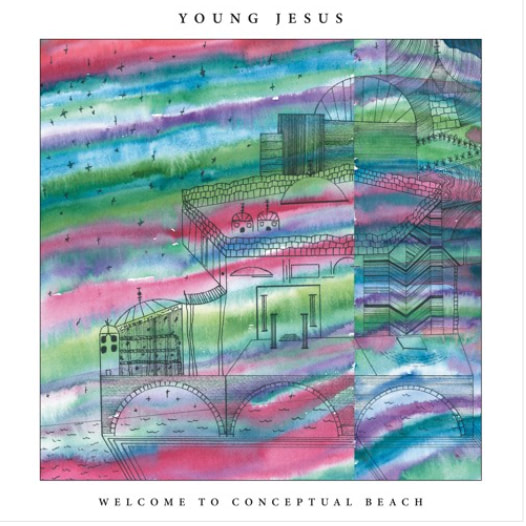 1 available
Add to Cart
Imagine a shoreline alone, carved from the continent, without land or water to border it, a rind of possibility, a moon-colored border between land and sea, knowing and unknowing. This is Conceptual Beach, a place John Rossiter, vocalist / guitarist of Los Angeles-based Young Jesus, describes as his long-time mental refuge, where he imagines himself living—like a medieval, stigmata-wrought hermit—all his needs for okay-ness finally met. Their new album, Welcome to Conceptual Beach, first took form as a physical zine in 2016, when the four members of the band were on their first tour together. At that time, it was still somewhere Rossiter inhabited alone, protective of his solitude. Now, he is allowing others to join him there. “The reason it’s called Welcome to… [Conceptual Beach] is because I’m inviting other inner landscapes into it,” Rossiter explains as he describes the transformation of the beach’s terrain into a whole varied emotional world.
Indeed, Welcome to Conceptual Beach elucidates the balance between many contrasting forces: the individual and the collective, the rational and the emotive, the tame and wild. It transforms the complex musicality of much post- and math-rock into a radical, crystalline practice, vibrant and light-casting. The band’s members - including Marcel Borbon (bass), Eric Shevrin (keys), and Kern Haug (drums) in addition to Rossiter himself - refract and reconnect throughout the record, experimenting with new kinds of sounds and composition. They artfully balance the wandering riffs of previous records with irresistible hooks, woven into their characteristic swathes of improvisation to create a shimmering, molten tapestry.
Faith, the opening track, runs parallel to the album as a whole: dynamic and groovy and psychedelic and emotional. Each musician has a moment to shine and to speak. Opening with Kern’s version of the Purdie Shuffle, to Marcel’s polyrhythmic bass, to Eric's organ solo, and held together by John's whispered prayer that, “we just might grow,” Young Jesus offer a music uniquely in service to emotion. (un)Knowing is a “meditation celebration,” a song about the confusion and pain of re-examining a life—of committing to a life of experience and curiosity. Mixing the spirit and experimentation of OK Computer with the sincerity of Bon Iver, Root and Crown is the first song that offers a way out of the traps and patterns of a life. A commitment to grieving, listening, and growing. A devotion to spring, sung from the depths of winter.
Whether it’s a bank-vault-turned-concert-hall in San Francisco, a Brooklyn artists’ collective, a house show in central Connecticut, or a recording studio, a Young Jesus performance is unique and unrepeatable. Recordings are only snapshots of their songs in a given moment. Over dozens of shows, a single song will metamorphosize each time it’s played, taking on infinite new geometries. When they play live, their jamming—a self-selected, unaffected and doggedly genuine term for their complex improvisations—is a visceral, communal experience. They render sound an instinct, filling the space with urgency and joy. The intensity of feeling and connection between the band members and to their music is a thick, palpable force that sweeps audiences up, propelling them into uncharted territories.