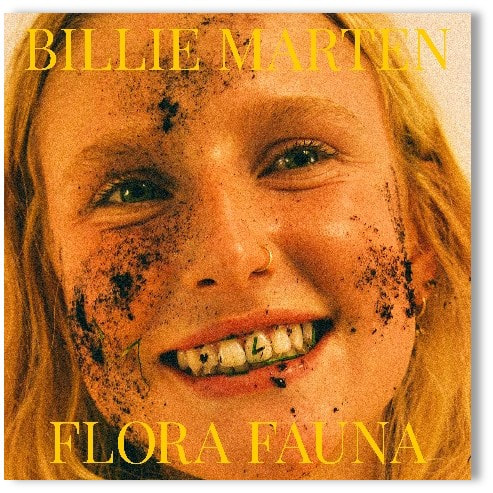 Sold Out
Add to Cart
Flora Fauna is the forthcoming third album from Billie Marten.

Raised in the rolling hills of North Yorkshire on artists such as Nick Drake, Joni Mitchell, Joan Armatrading, and Kate Bush, Marten’s critically acclaimed debut album Writing of Blues and Yellows, was released in 2016 when she was still just 17, while its follow-up Feeding Seahorses By Hand was similarly lauded in 2019 (# 53 in UK album chart).

Flora Fauna, was recorded with Rich Cooper in London. Marten’s new material blends those signature hushed, resonant vocals with a rapid pulse and rich instrumentation, her inspirations now stretching from krautrockers Can, to Broadcast, Arthur Russell, and Fiona Apple.

Built on the minimalist acoustic folk foundations she made a name for herself with, Flora Fauna is a more mature, embodied album fostered around a strong backbone of bass and rhythm. Shedding the timidity of previous work in favour of a more urgent sound, the songs mark a period of personal independence for Marten as she learned to nurture herself and break free from toxic relationships - and a big part of that was returning to nature. Features vocals by Guy Garvey (Elbow) on ‘Walnut’

“I wasn’t really treating myself very well, it was a bit of a disruptive time. All these songs are about getting myself out of that hole - they’re quite strong affirmations. The name Flora Fauna is like a green bath for my eyes. If the album was a painting, it would look like flora and fauna - it encompasses every organism, every corner of Earth, and a feeling of total abundance.”

​Side A
Side B