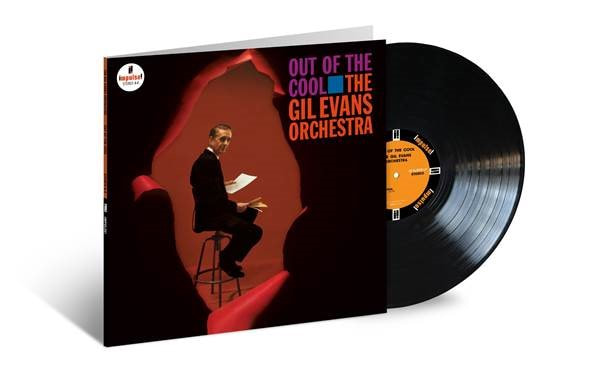 The Gil Evans Orchestra ~ Out Of The Cool

1 available
Add to Cart
Utilizing the skills of the top mastering engineers and the unsurpassed production craft of Quality Record Pressings, the Acoustic Sounds series is mastered from the original analog tapes, pressed on 180-gram vinyl and packaged by Stoughton Printing Co. in high-quality gatefold sleeves with tip-on jackets. The releases are supervised by Chad Kassem, CEO of Acoustic Sounds, the world’s largest source for audiophile recordings.
The Acoustic Sounds series features two releases a month highlighting a different storied label spanning Verve/UMe’s extraordinarily rich archive.
​
A classic big-band album and one of the first-ever releases on the Impulse! label. If one album evokes the style, the ethos, and the vibe of Impulse! among those first LPs in 1961 it is Out of the Cool. It features a superb line-up including Gil Evans on piano, Ron Carter on bass, a fabulous horn section with Ray Beckinstein, Budd Johnson, and Eddie Caine on saxophones, trombonists Jimmy Knepper, Keg Johnson, and bass trombonist Tony Studd, with Johnny Coles and Phil Sunkel on trumpet, Bill Barber on tuba, and Bob Tricarico on flute, bassoon, and piccolo, and a fiery Elvin Jones on drums.
This album was a move towards greater freedom in Evans’ compositions and arrangements, but at the same time there are echoes of his recent work with Miles on his Birth of the Cool sessions in the late 1940s.
The Penguin Guide to Jazz calls Out of the Cool, “Evans’ masterpiece under his own name and one of the best examples of jazz orchestration since the early Ellington bands”.
Verve’s Acoustic Sounds Series features transfers from analog tapes and remastered 180-gram vinyl in deluxe gatefold packaging.